How do you take something as inexpensive and boring as socks and build an empire that's worth almost a billion dollars?

Somehow, DTC apparel brand Bombas has done just that in less than a decade—but there’s more to their strategy than cool socks.

In this case study we’ll dive in to the 4 keys to their success:

Key 1: Bombas’ story is their selling-point

The story of Bombas is about more than just socks. It actually starts with homelessness.

Bombas was started in 2013 after the founders learned that socks were the most requested clothing item at homeless shelters. On top of that, they found the socks that were available to people experiencing homelessness were low quality and just really uncomfortable.

What really made their socks stand out was the mission behind them: a promise to help the homeless by donating a pair of their socks for each pair purchased.

This promise is what attracted their first batch of investors on Indiegogo and went on to get them a 200k deal on ABC’s Shark Tank.

A great brand story can really differentiate your brand especially in a crowded market.

If you’re not telling your brand story yet, here are some questions you can ask yourself:

Why’d you start your brand?

Was this a passion project?

Was it based on a need that you had personally that wasn't being met in the market?

Maybe you started your brand to help someone else?

So when you’re trying to reach new customers, how do you create ads that don’t cost an arm and a leg?

Bombas takes the simple route, and you should too.

The ad creative below isn’t fancy. It’s a simple video that shows the functionality of the sock with a great voice over describing its features.

It looks like any normal video you’d see in your feed—that’s the power of UGC (you can learn more about how to use user-generated content to grow your brand here).

Any creator can make this type of video with their cell phone by simply showing the product, and explaining why it’s so good.

It also doesn’t hurt to have a clear call to action at the end of the video.

These simple ads get people interested enough to click through and visit the store. And once a visitor comes to the site Bombas hits them with a 20% off discount in exchange for an email. 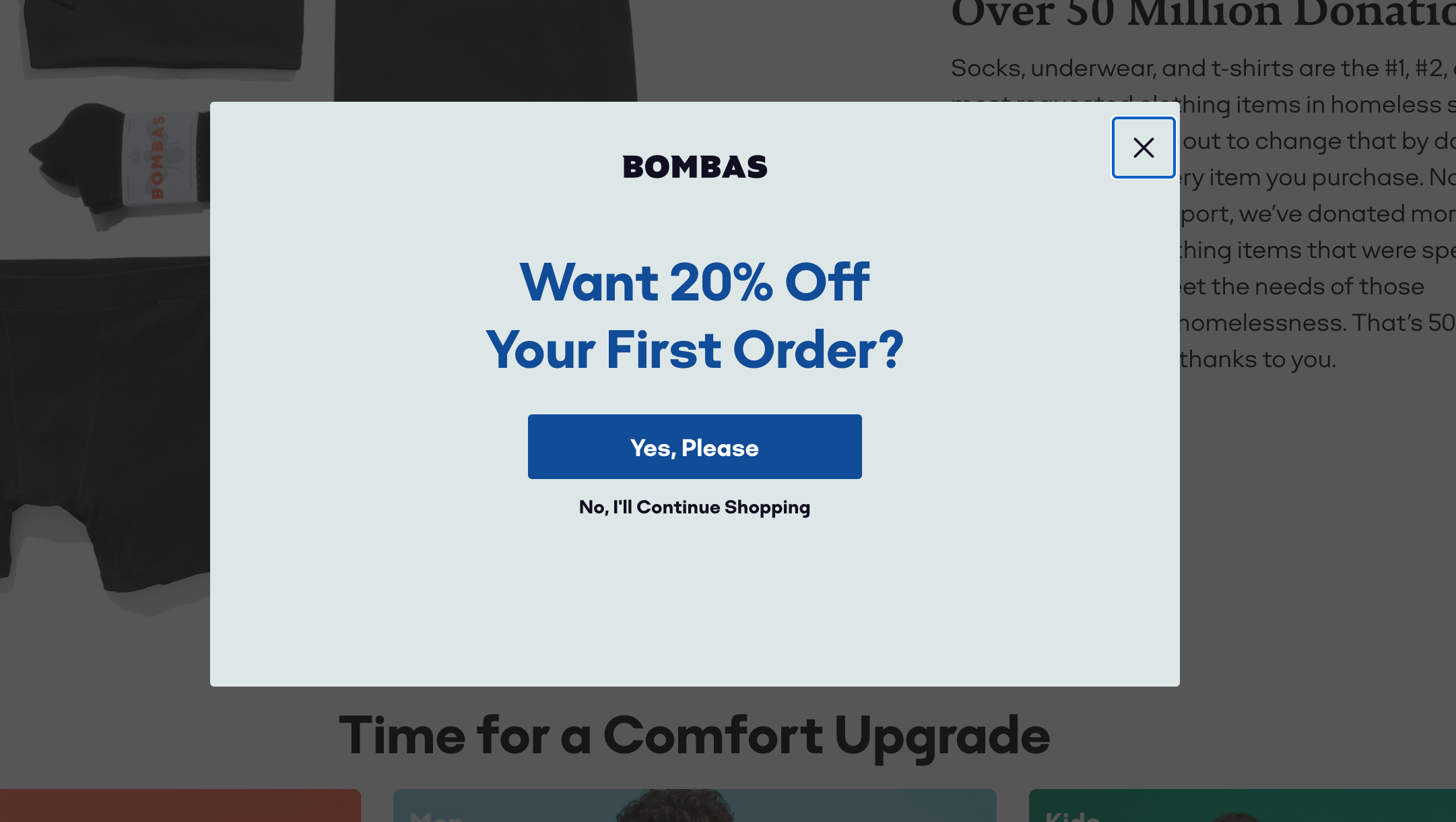 This tactic is pretty normal, but when you take a closer look, the email sequence that they use is game changing to help eliminate customers' cold feet about splurging on those premium socks.

Let’s take a look at the exact email sequence Bombas uses once you sign up for their 20% discount by entering your email address. 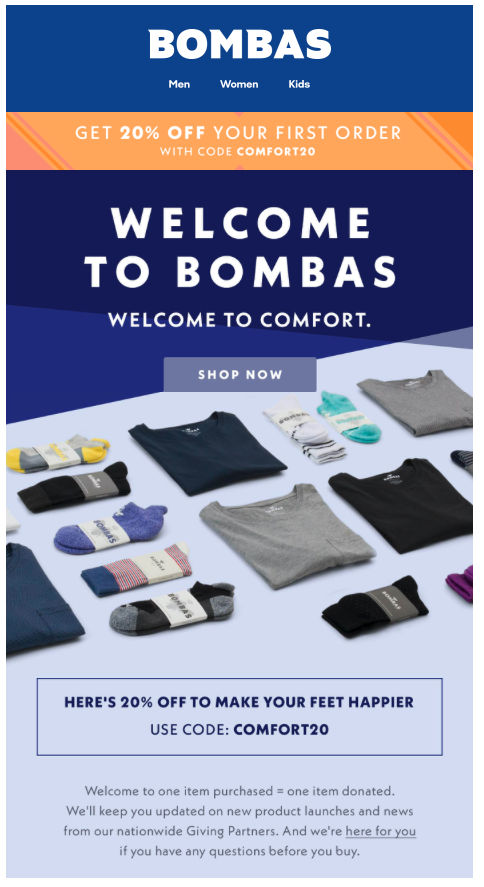 Over the next 14 days, we received a sequence of emails using different angles to convince us to buy Bombas socks:

Notice the strategic delay in the emails being sent and the pattern of skipped days.

$12 might seem pricey for one pair of socks, but for an ecommerce store, if customers only bought one pair that cart value would be too low to scale an ecommerce brand.

Most e-commerce brands shoot for an average order value north of $40-50.

First, they mainly feature product bundles on their site.

When scrolling through the site you’ll notice that most of the socks that appear in the listing are bundled. They show a few single pairs, but most of them are the higher priced socks.

This bundle strategy increases the average amount that the customer will spend, but they incentivize the bundles by giving price breaks when you buy additional pairs. For instance:

Buying 4 separate pairs of socks will cost you more than simply buying a bundle of 5 pairs.

The other way they increase order value is by setting their free shipping tier at $50. 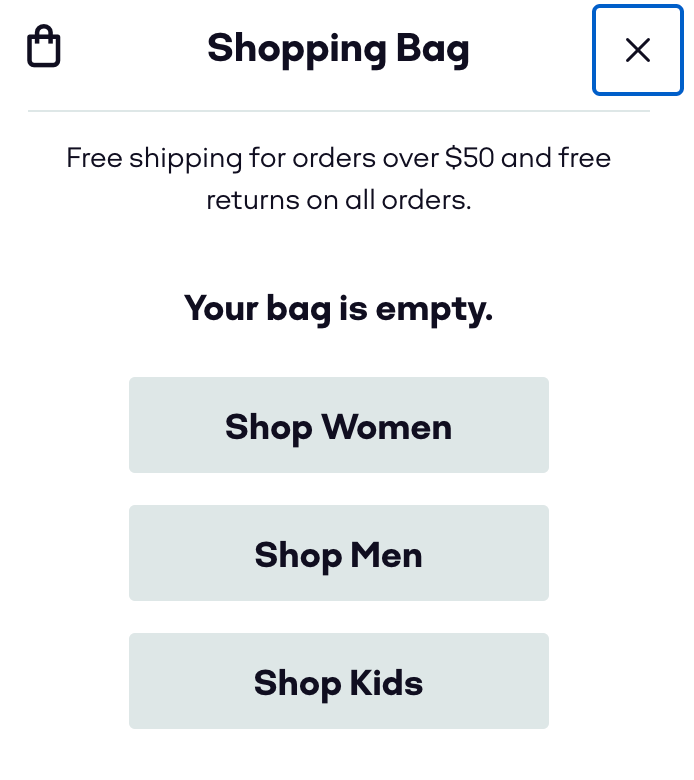 By spending $50, customers are guaranteed free shipping on their order. Most of their bundles are valued at $50 or more, making it easy for customers to earn free shipping.

In most cases, the answer seems to work in favor of Bombas.

Previous: 6 TikTok Fitness Influencers To Work With in 2022

Don't be left out!

Subscribe to our newsletter for the latest DTC trends and insights.